Last July, the German government amended the Telemedia Act and is now moving forward with its plan to improve the access to free Wi-Fi hotspots nationwide. Nevertheless, legal vagueness together with the protection requirements of new networks may slow down the process.

The recently amended German Telemedia Act, the legislation that sets the framework for internet access across the country, officially signed the end of the so-called Störerhaftung (liability as a co-liable party) law, a law that states that Wi-Fi network owners in Germany are liable for the illegal activities run by people using their connections. With the introduction of the Telemedia law, the future of free Wi-Fi hotspots in Germany now seems to be brighter, as more business owners will feel encouraged to provide their businesses with Wi-Fi access, without fear of being prosecuted for any cybercriminal activities carried out on their networks. However, providers and retailers have complained about the lack of clearly stated rules about how Wi-Fi hotspots providers should electronically secure their Wi-Fi networks, as the act only mentions the usage of “adequate” electronic security, such as encryption methods, without clear specifications. 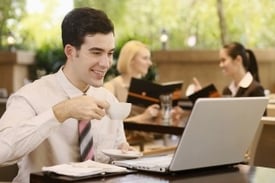 In addition to this, a  new law approved last September by the Court of Justice of the European Union, could also slow down the country’s digital agenda, whose main goal is to provide users with internet access anywhere and anytime. According to this new legislation, businesses that offer free access to Wi-Fi hotspots, such as coffee shops and hotels, are no longer liable for copyright infringements committed by the users accessing their networks. However, network password security seems not enough to prevent copyright violations: copyright owners can now require Wi-Fi service providers to ask their users to identify when accessing their networks.

This new law raised concerns in terms of privacy rights and anonymity while browsing the internet. In particular, users would be obliged to reveal their identity and, at the same time, operators would have to control their users’ data information, as a way to detect illegal activities. In this respect, the Social Democratic Party’s spokesman for the digital agenda in the German Bundestag, Lars Klingbeil, stated that all hurdles against easily accessible Wi-Fi need to be eliminated, and service providers should not be forced to close their networks or demand users to register. Furthermore, The German Retail Federation HDE recently complained about the bureaucracy costs shop franchises would bear if they manage user registration systems.

All in all, the new requirements to prevent copyright infringement, together with vagueness about electronically network security, could slow down the spread of free Wi-Fi hotspots in Germany. In light of these circumstances, the German Ministry of Economy announced it intends to revise the Telemedia Act to make clarity about these topics.