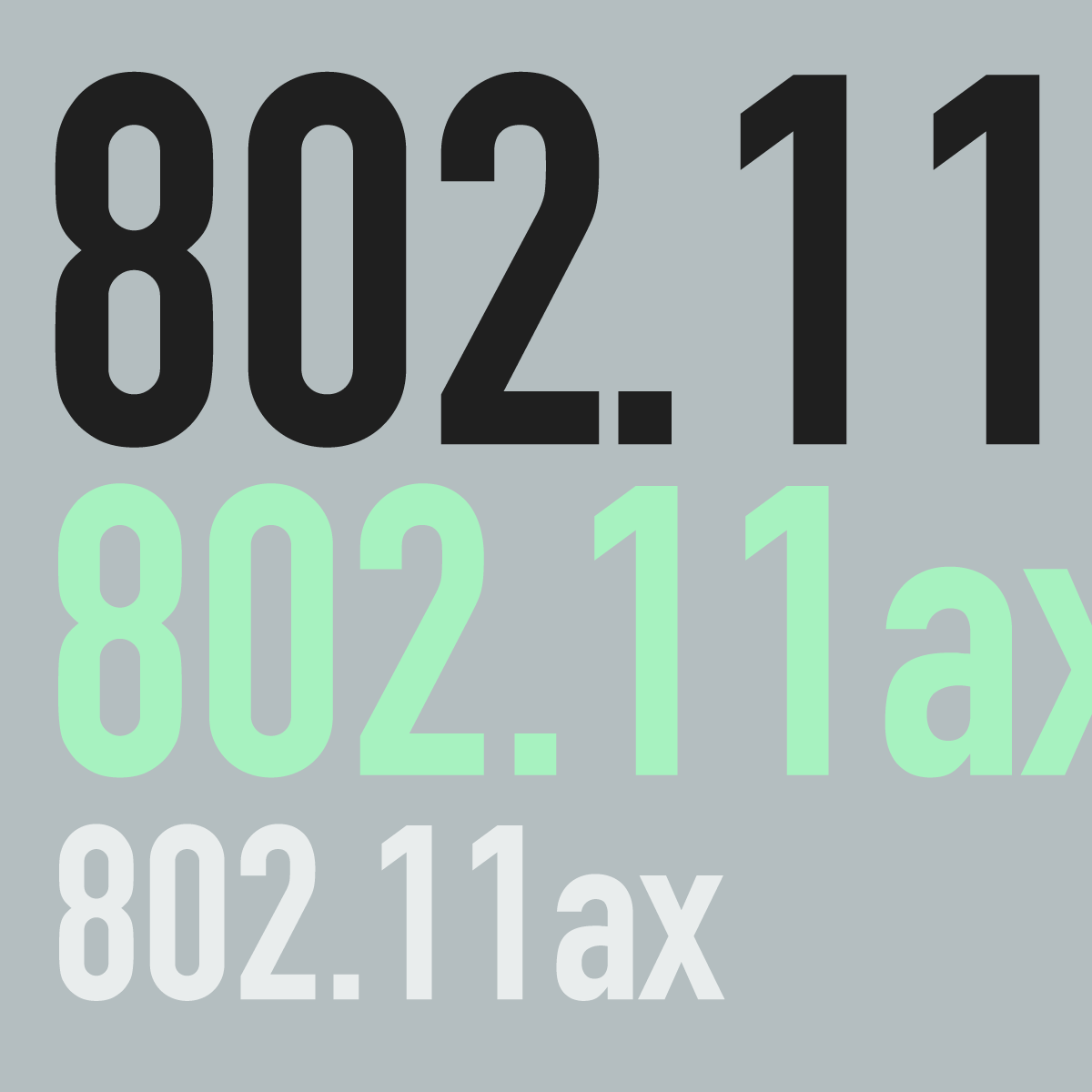 MSPs – The ultimate guide to the 802.11ax wireless standard

Get ready for the new 802.11ax wireless standard!

In today’s ‘always connected’ world, MSPs have the responsibility of keeping all their wireless networks up and running 24/7. The way users consume data and the ever-growing number of connected devices in a network, only reassures that user behavior continues to be the main driver for changing the portfolio of services offered by MSPs.

As users still outline the guidelines for action with their evolving needs for a more connected world, MSPs need to stay one step ahead of the trend and stay informed to guide their clients through the rapid shifts of the wireless market.

The evolution of the WiFi standard, the so-called 802.11ax or WiFi6, is coming down our way this year. This standard will lift some pressure on wireless networks deployed in dense environments with multiple client devices connected at once. 802.11ax promises improved speed levels, increased efficiency, and reduced congestion in heavy-bandwidth usage scenarios.

MSPs need to manage and guide their customers during this transition from the standard 802.11ac to 802.11ax. At this point, SMBs might be wondering about new access points, the standard itself, and compatibility with their current devices. Also, another concern for SMBs is whether it is necessary to upgrade all the infrastructure promptly to comply with the WiFi standard or do nothing. Right now is the time for MSPs to step in and take the lead. Understanding the latest 802.11ax wireless standard is essential to prepare your customers for embracing the new wireless technology.

This is a series of articles about the 802.11ax wireless standard. In this article, we’ll cover the general concepts, benefits, and the technology behind 802.11ax in plain English.

Every new WiFi standard brings significant improvements in performance, speed, and capabilities for the wireless connection. The IEEE 802.11 family of wireless standards is giving a spin to the current 802.11ac to boost and improve the performance. Hereafter, the family of standards has a new member: the high-efficient wireless 802.11ax.

The 802.11ax standard, also known as WiFi6 or high-efficient wireless, is an evolution of the standard wireless 802.11ac. The 802.11ax, unlike its predecessors, focuses on better efficiency, performance, and capacity.

These achievements are possible thanks to multiple variations in the current standard. For example, the new 802.11ax has more OFDMA sub-channels, MU-MIMO user multiplexed, higher order 1024-QAM and beamforming. Furthermore, uplinks are now scheduled instead of based on contention. Also, the channel interference gets drastically reduced through BSS color coding, thanks to better power-control methods to avoid interference with neighboring networks.

To sum up, the IEEE 802.11ax wireless standard promises to solve some of the problems left behind by its predecessors. Furthermore, it will ease congestion in high-density environments like airports, stadiums, shopping malls, conference centres, universities/schools and offices/co-working spaces.

The amendment of 802.11ax will be ratified in the first quarter of 2020. As of now, the WiFi Alliance has begun its 802.11ax certification program name as WiFi6 – naming convention that will prevail for the general consumer. As with previous standards, vendors have already released some chipsets compatible with 802.11ax, even before the certification is official.

What are the benefits of 802.11ax for dense environments?

The 802.11ax wireless standard will allow MSPs to support the latest applications on the same wireless deployments, while delivering a higher service to legacy applications. Correspondingly, it will enable new business models and push towards WiFi adoption even more.

High-density environments will enjoy the benefits of 802.11ax, as compatible access points will support more client devices connected simultaneously. Further, traditional wireless networks will have a much better experience. Likewise, applications like 4K or 8K video, IoT, VR, and AI devices will get more predictable performance.

The IEEE 802.11ax standard brings together well-performing wireless techniques and blends them in such a way that accomplishes significant achievements over the forerunner 802.11ac standard. Remarkable, it keeps backward compatibility with the old standards as it supports both 2.4GHz and 5GHz bands.

Let’s deep dive into the technology that will make possible 802.11ax:

In terms of speed, the current 802.11ac offers a maximum rate of 1.3Gbps. Instead, the 802.11ax standard promises a 30% faster top speed, with a maximum transfer speed of 10Gbps. This is true even for high density (outdoors and indoors) environments. However, the speed rate is not the main driver of 802.11ax. The main key selling point for 802.11ax is to solve some of the most enduring problems that WiFi networks face nowadays, including latency and client density.

At the heart of the new 802.11ax standard, there is the “how” to handle radio frequencies.  The 802.11ax standard operates in both 2.4GHz and 5GHz bands, with allocations of 20MHz channels. The channels can be put together in blocks up to the 160MHz channel. Moreover, the 20MHz channels are divided into 256 smaller sub-channels. It is roughly more than 64 sub-channels compared to the previous standard. Consequently, it improves the resolution with which a link can cope with interference, frequency-dependent fading, and so on.

MU-MIMO stands for Multi-user Multiple Input/Multiple Output. MU-MIMO, a technology introduced previously in the 802.11ac Wave 2, is another way to handle traffic from multiple devices. Multiple users access the same access point at once without any noticeable decrease in bandwidth quality – until a certain point.

The 802.11ac 4×4 MU-MIMO Wave 2 devices can only handle four users at a time for downloads. Instead, the 802.11ax 8×8 MU-MIMO supports up to eight users downloading and also uploading data at the same time. Each user has a dedicated channel to transmit data.

The enhanced 8×8 MU-MIMO increases overall capacity. Thus, large packets of data are handled more efficiently and transmitted simultaneously, allowing for multiple connections to happen at once. As a result, this feature enables access points to manage traffic from a variety of 802.11ax devices more effectively.

So, it doesn’t matter if people are making use of video calls or streaming HD video, downloading, or playing games. Thanks to 8 MU-MIMO streams, there’s more than enough bandwidth for everybody.

Thanks to OFDM, OFDA, and OFDMA, each channel is split into many smaller sub-channels. Each of them with a slightly different frequency. For instance, the standards 802.11a/g/n/ac currently use OFDM for single-user transmissions on 802.11 frequency. Here, the allocation of users is on the time domain. However, the new 802.11ax wireless standard utilizes OFDMA, which is a multi-user version of the OFDM digital-modulation technology, in which users allocation is by time and frequency.

For example, with the OFDM technology, users would occupy all subcarriers for a specific period, even if there’s not much data to send. Instead, with OFDMA, many users can be multiplexed at once, and each of them can use different sets of subcarriers. In consequence, OFDMA is well-suited for low-bandwidth apps, while at the same time, users experience less latency. By around 75% less than with OFDM.

OFDMA, introduced for the first time in wireless networking, is the most crucial multi-user feature available for 802.11ax. It allows multiple client devices with different bandwidth needs to be served at the same time. Instead, the existing devices compete with one another to send data. Consequently, with 802.11ax, there will be no “waiting time” as each device will be simultaneously scheduled to transmit data in parallel.

OFDMA does not increase overall capacity. However, it makes use of the capacity more efficiently by allocating subcarriers to users based on their bandwidth needs. If we think again in a high-density environment like airports, stadiums, and shopping malls, for instance, client devices making use of applications that are latency-sensitive like IoT devices and voice traffic will experience a better performance thanks to the way OFDM handles short data packets. The transmission of these data packets is simultaneous, enabling multiple connections to happen at once. Lastly, it allows access points to handle traffic from a variety of 802.11ax devices more effectively.

Another issue affecting WiFi speed in dense environments is mutual interference between access points in the same channel or overlapping groups of channels. BSS stands for Base Service Station, is a feature that reduces WiFi conflicts with neighboring wireless networks through color coding.

WiFi copes with this co-channel interference by CSMA/CA (Carrier Sense with Multiple Access Collision Avoidance), which means that a radio that wants to transmit data first needs to listen to its frequency. If it hears another transmission in the process, then it needs to wait sometime before trying to communicate again.

Therefore, the BSS color, which is a numerical identification between 0 and 7, comes in handy to highlight frames in neighboring wireless networks. AP’s that are too closed on the same channel get a configuration that forces them to use different colors. So, when an AP or client device wants to transmit data, it picks up on a signal within its channel. Then, it checks the color code associated, and if it’s different and the signal intensity is sufficiently low to demonstrate there’s a “low-to-non chance” of interference, then the transmission goes ahead.

Now, users can reduce the power consumption on devices with target wake time (TWT). The TWT is a mutual negotiation between an access point and a client device about ‘when’ and ‘how often’ the AP will query the client device to send or receive data. This technology allows client devices to go in a low-power mode in-between ‘awakenings.’ At the same time, it significantly enhances the battery life of devices. Lastly, it lets the access points create efficient use patterns to maximize the number of client devices it can handle over time.

QAM is a highly developed modulation scheme extensively used in the modern telecom industry to transmit data over radio frequencies. Currently, the 802.11ac only offers a 256-QAM capacity, which is only reliable for low-dense environments. Hence, the challenge is to ensure fast and reliable WiFi coverage in dense locations, where streaming 4K video or virtual reality content is the average consumption for users.

To overcome the challenge, the new 802.11ax will offer a 4X increased capacity over the forerunner standard. In short, the higher the QAM levels, the more the throughput capabilities in wireless devices. Besides, it comes with 10 bits per symbol vs. 8 bits available in the 256-QAM. “More bits, more data”, and data delivery becomes more efficient.

Consequently, the 802.11ax will have a 1024-QAM capacity that will allow only compatible access points and supported devices, within a network in dense environments to enjoy a +25% speed burst. Put simply, an increase in throughput capabilities for wireless devices.

With millions of connected devices expected by 2021, the throughput capacity of 1024-QAM is essential to ensure the quality of service (QoS) in dense environments.

The next article will discuss devices already available in the market that support the 802.11ax wireless standard, pros and cons, speed tests, and our perspective whether its best to upgrade all WiFi devices -or not, to comply with the new standard.

How 80211ax will improve your Wi-Fi network capacity